The Homeland Security Department released more than 1,100 illegal immigrants with criminal records from its detention facilities in December as it sought to make room for a border surge that never materialized.

Deportation officers said they were told to stop making arrests and clear space for the impact expected with a change in a pandemic border policy. The data, released this month by U.S. Immigration and Customs Enforcement, shows the extent of the moves.

Officers said the releases were tied to the Title 42 pandemic border policy, which under a court order was supposed to disappear just before Christmas. The Homeland Security Department said already record levels of border chaos could triple, and they were clearing space out of ICE facilities to try to hold some of the most egregious border violators.

Ultimately, the Supreme Court ordered that Title 42 remain in place while it hears and considers arguments. Although illegal border crossings increased, the cataclysmic surge did not materialize.

That made the releases all the more aggravating, said R.J. Hauman, head of government relations at the Federation for American Immigration Reform.

“What they did in December in anticipation of the Title 42 ruling that never came down was yet another act of enforcement theater that jeopardizes public safety and the integrity of our system,” Mr. Hauman told The Washington Times.

Detaining illegal immigrants awaiting deportation is supposed to be the norm, particularly for those caught at the border.

Yet the sheer size of the border chaos and the Biden administration’s antipathy toward detention mean beds go unused while illegal immigrants are released into the country.

The criminals represented just a fraction of December releases, which totaled 20,279. That was up more than 80% from the averages in October and November.

ICE was using only a little more than 20,000 detention beds in early January despite being funded for an average of 34,000 beds on any given day.

ICE didn’t respond to an inquiry for this article.

Tom Homan, who led ICE during the first part of the Trump administration, told The Times that all detention decisions are now made by a political appointee, not career staffers.

Mr. Homan said the appointee is trying to push toward release rather than detention.

“The sad thing is this: There are many empty beds sitting empty already paid,” he said. 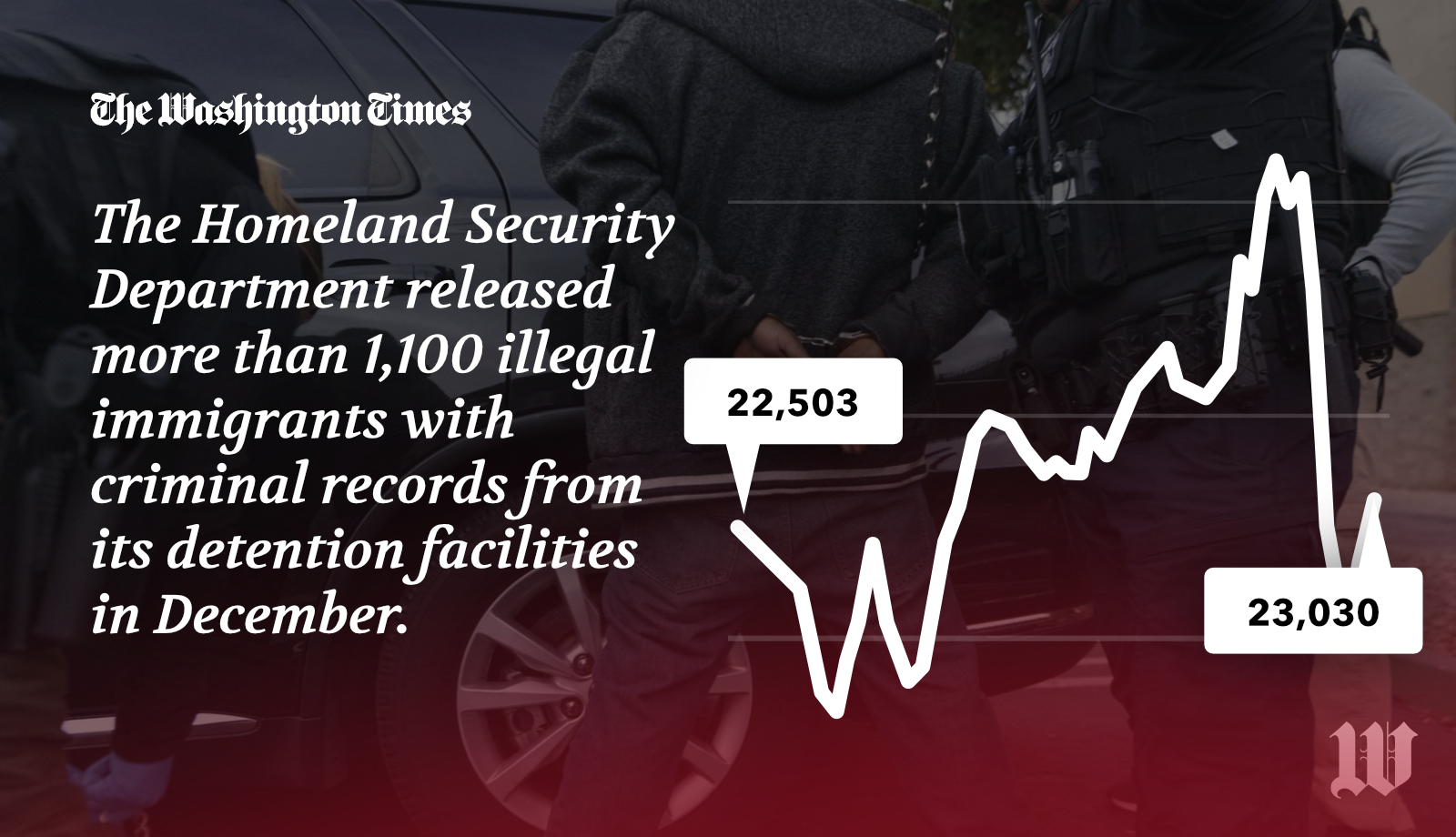 Part of the problem appears to be about money siphoned to groups that are chummy with the Biden team, Mr. Horman said. That includes nongovernmental organizations that the government pays to help settle released immigrants in communities and for-profit companies that oversee the monitoring programs that track some of the migrants on release through phone check-ins.

Mr. Homan said detention is the crux of enforcement. If illegal immigrants can be detained, then they can be deported. The vast majority of those released end up staying, either by delaying their court cases or ignoring deportation rulings once they are issued.

“They are in the wind waiting for the next amnesty deal,” Mr. Homan said.

ICE has two types of releases from detention. One is bonding out either by a judge or by ICE. The other is a discretionary release by ICE, either on an order of recognizance or an order of supervision or through the homeland security secretary’s power of parole.

That came to 1,156 total criminal releases, 515 of them with convictions and the other 641 with pending charges.

One ICE officer said his region was instructed not to make any further arrests because of a lack of detention space.

The result is that ICE officers booked in just 5,950 people in December, down from roughly 6,500 in October and November, according to data kept by the Transactional Records Access Clearinghouse at Syracuse University.

In the Trump years, pre-pandemic, ICE regularly booked in double that number per month.

• Stephen Dinan can be reached at sdinan@washingtontimes.com.