In 1914, a single bullet fired into the chest of Archduke Ferdinand by a Serbian terrorist quickly and unexpectedly exploded into World War I.

The Austro-Hungarians mobilized their armies to punish Serbia. Russia mobilized armies to defend their Serb “little Slavic brother.” Germany mobilized, then France, then Britain, and by 1918 there were 40 million casualties, 15-22 million dead.

Now President Biden’s ill-conceived efforts to save Ukraine from Russian invasion could spark a much larger conflict, perhaps even nuclear World War III.

After years of denial, Washington seems to finally understand that as a result of the ongoing Ukrainian crisis, Russia and China really are allies, prepared to coordinate aggression against Europe, Asia, and America.

• Ukrainian entry into NATO, official or de facto, Russia perceives as an existential threat, as NATO missiles, air forces and armies advanced to eastern Ukraine would be only 300 miles from Moscow, within easy striking distance for surprise attack;

• Ukrainian territory is traversed by Russian petroleum pipelines that are a major source of Moscow’s revenue;

• Ukraine, according to Russian dictator President Vladimir Putin, is Russia’s “Slavic brother” and, as part of the former Soviet Union, belongs in a New Russian Empire.

• Ukraine, if annexed by Russia, will enable Moscow to move its missiles, air forces and armies into western Ukraine and Belarus, along the entire eastern border of NATO member Poland, posing a steel spearhead that could knife through NATO to the English Channel, as the USSR threatened to do during the Cold War.

The U.S. Defense Department and RAND Wargames show that Russia can overrun Ukraine and the frontline NATO states in Eastern Europe in 72 hours.

RAND analysis finds a Russian invasion of NATO’s Baltic states cannot be defeated, even if the U.S. resorts to tactical nuclear weapons.

Russia has an overwhelming advantage in tactical nuclear weapons, an estimated 2,000-8,000 warheads versus 180 tactical U.S. warheads, all of which are based in Europe. 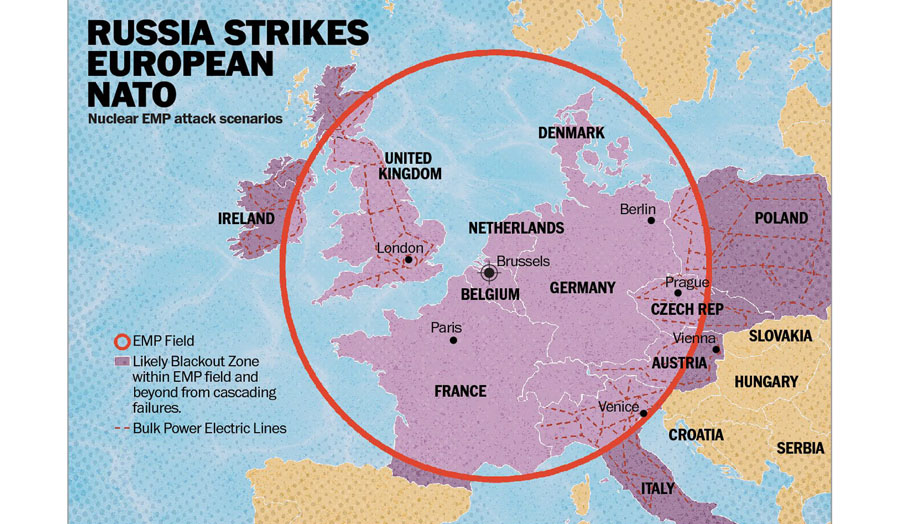 Moreover, Russian nuclear warheads are more technologically advanced: designed for ultra-low-yields for use by land, sea and air forces; specialized effects like neutrons, X-rays and electromagnetic pulse; and “clean” so they produce no radioactive fallout. Russian nuclear weapons are not only a deterrent but militarily practical for use on the battlefield.

Moscow may use Washington’s arming of Kyiv as a pretext to invade Ukraine and bordering nearby NATO states that are also supplying arms to isolate Ukraine and expand Russia’s “defensive” frontiers.

Mr. Biden has sent a few thousand troops to supplement the 8,500 U.S. troops spread out along NATO’s eastern border in penny packets. These are intended to deter invasion of NATO by the 120,000 Russian troops massed on Ukraine’s border, backed by the Russian Army numbering over one million.

The U.S. military presence is no practical defense of NATO. The U.S. and its NATO allies would be overwhelmed in a conventional war.

Detonated 70 kilometers high over NATO Headquarters in Brussels, the EMP field would blackout electric grids and paralyze NATO military forces from Poland to Britain, making a red carpet for a Russian invasion. U.S. troops and 30,000 civilians fleeing Ukraine would become POWs. Russian tanks could reach the English Channel in days.

After an EMP attack, the U.S. would discover it has no tactical nuclear weapons. Even if some delivery systems survive the EMP, it is doubtful any host European government would allow a tactical nuclear strike against Russia from its territory, fearing nuclear retaliation.

Russia may be able to destroy NATO without World War III and is already fracturing NATO with the Ukrainian crisis. Germany, European NATO’s “strongman,” is being lambasted for refusing to send arms to Ukraine, allegedly because of German dependence on Russian natural gas.

However, maybe Berlin fears stoking war in Ukraine because, during the last century, Berlin was on the losing side of two world wars. Maybe Germany remembers its destroyed cities, being raped and occupied by Russia, remembers its 5-7 million dead.

NATO has never been more fragile militarily and psychologically. The closer NATO moves toward a losing war with Russia, the alliance will increasingly fracture toward disintegration.

• End the Ukrainian crisis by promising NATO will not include Ukraine or expand eastward;

• Try making Russia a strategic partner or neutral in the New Cold War with China;

The Bear, friend or foe, respects only strength.

Supreme Court corrects a miscarriage of the Constitution

How the pro-life movement is winning

Why the left will cut Biden loose

Trump’s critical deficiency during his presidency