The Chinese leader, who has faced mounting internal dissent over his handling of the pandemic in recent weeks, addressed the nation’s loosening of disease controls for the first time on Monday.

China needs to launch a new campaign similar to the Patriotic Health Campaign that stretched from 1950 to 1951, Mr. Xi said.

The Patriotic Health Campaign sought to eradicate “poisonous insects” the Chinese Communist Party alleged were spread to China as part of U.S. germ warfare programs during the Korean War.

“At present, our country’s COVID prevention and control efforts are facing new circumstances and a new mission,” Mr. Xi said, according to the official Xinhua news agency.

The Chinese leader said the nation should conduct “a more targeted Patriotic Health Movement” — a reference to the 1950s effort — that would seek to “effectively guarantee the lives and health of the people.”

Mr. Xi has backed off draconian pandemic controls that sparked nationwide protests against his rule and the Chinese Communist Party (CCP), and the dynamic “zero COVID” campaign that sought to tout party prowess in halting the spread of the virus.

China is experiencing massive COVID-19 outbreaks around the country, with millions of people infected.

Lockdowns and quarantines were enforced by police in white biohazard suits called “Big Whites” by Chinese opposed to the crackdowns.

Mr. Xi’s new mass campaign against the pandemic is being dubbed the “Healthy China Initiative.”

China watchers say Mr. Xi has been weakened by the failure of his regime’s zero-COVID policy in the face of popular resistance.

His reference to the Patriotic Health Campaign follows Chinese government efforts to deny the pandemic began in Wuhan and to blame the United States for causing the disease outbreak.

In the winter of 1951, the People’s Daily, the official CCP newspaper, sought to link domestic epidemics in China to North Korean reports on the use of U.S. germ warfare in Korea.

In response, the Patriotic Health Campaign required all Chinese to eliminate rats, fleas and flies, to remove garbage, and develop clean water. 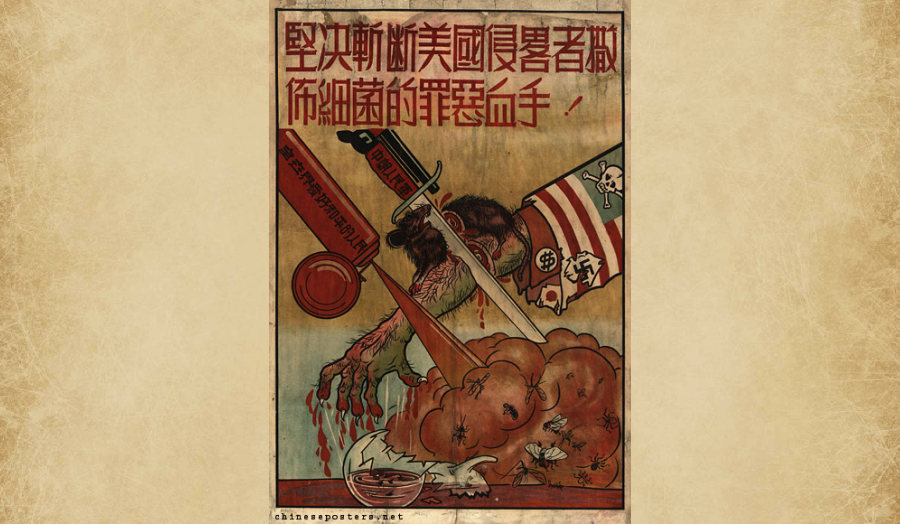 Mr. Xi’s reference to the 1950s campaign highlights continuing Chinese propaganda that has sought to assert the U.S. military brought the virus to China.

The virus began in Wuhan, and limited evidence on its origin so far points to either a leak from the Chinese military-linked Wuhan Institute of Virology, which was conducting dangerous research, or from an infected animal that has yet to be identified.

Last year, Chinese state media revived past disinformation about the use of germ warfare by the U.S. military in Korea by broadcasting on state television a 40-part series called “Crossing the Yalu.”

One of the later episodes of the drama showed computer-generated images of American aircraft dropping bombs that do not explode. Later, the program shows Chinese troops encountering open bomb canisters containing deadly biological agents that infect and kill at least one of the show’s characters.

A 2016 report by the Woodrow Wilson International Center for Scholars based on public disclosures from Soviet Central Committee documents in 1998 concluded the germ warfare allegations were fraudulent and stated that “China and, much more noisily, North Korea still maintain the charges.”

China‘s military is building up its submarine forces as a priority for its large-scale military modernization, according to the latest annual Pentagon report on the Chinese military.

A total of 25 or more Yuan submarines will be built by 2025, the report said.

The PLAN has already produced 12 nuclear-powered submarines during the past 15 years. They include two Shang-1-class and four Shang-2-class nuclear attack subs. China‘s nuclear-missile firing submarines include six Jin-class boomers equipped with JL-2 missiles.

A new version of the Shang-class submarines will be built by the mid-2020s and will “enhance the PLAN’s anti-surface warfare capability and could provide a clandestine land-attack option if equipped with land-attack cruise missiles,” the report said.

A push by the PLAN to bolster its efforts to track and attack foreign submarines are also advancing.

The Chinese military, however, lacks a robust deep-water anti-submarine warfare capabilities, the report said, although it asserted the following: “By prioritizing the acquisition of ASW capable surface combatants, acoustic surveillance ships, and fixed and rotary wing ASW capable aircraft, the PLAN is significantly improving its ASW capabilities.”

“However, it will still require several years of training and systems integration for the PLAN to develop a robust offensive deep water ASW capability.”

Earlier this month, Air Force Gen. Anthony Cotton took over as the new commander of the U.S. Strategic Command, in charge of all the nation’s nuclear forces of missiles, submarines and bombers.

Gen. Cotton said in remarks at a change-of-command ceremony for outgoing commander Adm. Charles Richard that new perils face the United States as nuclear forces must deter both Russia and China.

“In this new face of competition, we face two peer adversaries,” he said, noting that the Strategic Command is positioning for the future.

“The deterrence and combat capability we provide is bedrock to all operations,” he said. “Everything we do is foundational to national and international security. It’s not just our nation that’s counting on us, it’s our allies and partners.”

The general, who formerly headed the Air Force Global Strike Command, said the new B-21 Raider, unveiled earlier this month, is the first new strategic bomber in more than three decades.

“The Raider, Sentinel, our next generation ICBM, the new Columbia-class ballistic missile submarine, the next generation nuclear command, control and communications, represents an era of significant transformation for our nuclear forces,” Gen. Cotton said.

“And as we transition to these new systems that are going to be even more capable and synchronize all of our capabilities through integrated deterrence, our deterrence will only get stronger.”

Gen. Cotton said people often ask him what keeps him awake at night.

The four-star general said he really doesn’t lose sleep when he goes to bed.

“And here are the reasons why,” he said. “First, the United States has the greatest military power in the history of the world. Second, the United States is part of the most successful security alliance in the history of the world that has enabled almost 75 years of stability, prosperity, and growth. And finally, I don’t lose sleep because there are brave men and women who are keeping watch 24/7, even as I speak. They may be underwater, underground, airborne, or watching space. This gives me confidence.”

• Bill Gertz can be reached at bgertz@washingtontimes.com.