Advertisement
SPONSOREDWhat's This?
This content is made possible by our sponsor; it is not written by and does not necessarily reflect the views of The Washington Times' editorial staff. Email avercammen@washingtontimes.com to learn more.

Statement by the Russian Ministry of Foreign Affairs

We note U.S. President Joseph Biden’s readiness expressed at the December 7, 2021 talks with President Vladimir Putin to establish a serious dialogue on issues related to ensuring the security of the Russian Federation. Such a dialogue is urgently needed today when the relations between Russia and the collective West continue to decay and have approached a critical line. At the same time, numerous loose interpretations of our position have emerged in recent days. In this connection we feel it is necessary to once again clarify the following.

Escalating a confrontation with our country is absolutely unacceptable. As a pretext, the West is using the situation in Ukraine, where it embarked on encouraging Russophobia and justifying the actions of the Kiev regime to undermine the Minsk agreements and prepare for a military scenario in Donbass.

Instead of reigning in their Ukrainian protégés, NATO countries are pushing Kiev towards aggressive steps. There can be no alternative interpretation of the increasing number of unplanned exercises by the United States and its allies in the Black Sea. NATO members’ aircraft, including strategic bombers, regularly make provocative flights and dangerous manoeuvres in close proximity to Russia’s borders.  The militarisation of Ukraine’s territory and pumping it with weapons are ongoing.

The course has been chosen of drawing Ukraine into NATO, which is fraught with the deployment of strike missile systems there with a minimal flight time to Central Russia, and other destabilising weapons. Such irresponsible behaviour creates grave military risks for all parties involved, up to and including a large-scale conflict in Europe.

At the same time, statements are made that the issue of Ukraine’s hypothetical NATO membership concerns exclusively Kiev and the Alliance, and that nobody should interfere in this process. Let us recall, however, that NATO countries, apart from the Washington Treaty, have obligations regarding the indivisible security in the Euro-Atlantic and the entire OSCE space. This principle was initially proclaimed in the Helsinki Final Act and was later reaffirmed in the Charter of Paris for a New Europe of 1990, which states: “Security is indivisible and the security of every participating State is inseparably linked to that of all the others”, whereas in 1999, The Charter for European Security was adopted at the OSCE Istanbul summit, which stressed that the participating States “will not strengthen their security at the expense of the security of other States.”

All these documents were signed by the leaders of the OSCE member-states, including all NATO countries. However, in violation of the principle of indivisible security – as well as in violation of the promises given to the Soviet leaders – NATO has been persistently moving eastwards all these years while neglecting Moscow’s concerns. Furthermore, each new member added to NATO’s frenzied anti-Russia charge.

We have been saying for a long time that such developments are inadmissible. Over the past decades we have offered a number of times to render the principle of comprehensive and indivisible security in the Euro-Atlantic a legally binding status since the West is obviously inclined to disregard its political obligations. However, we were invariably refused. 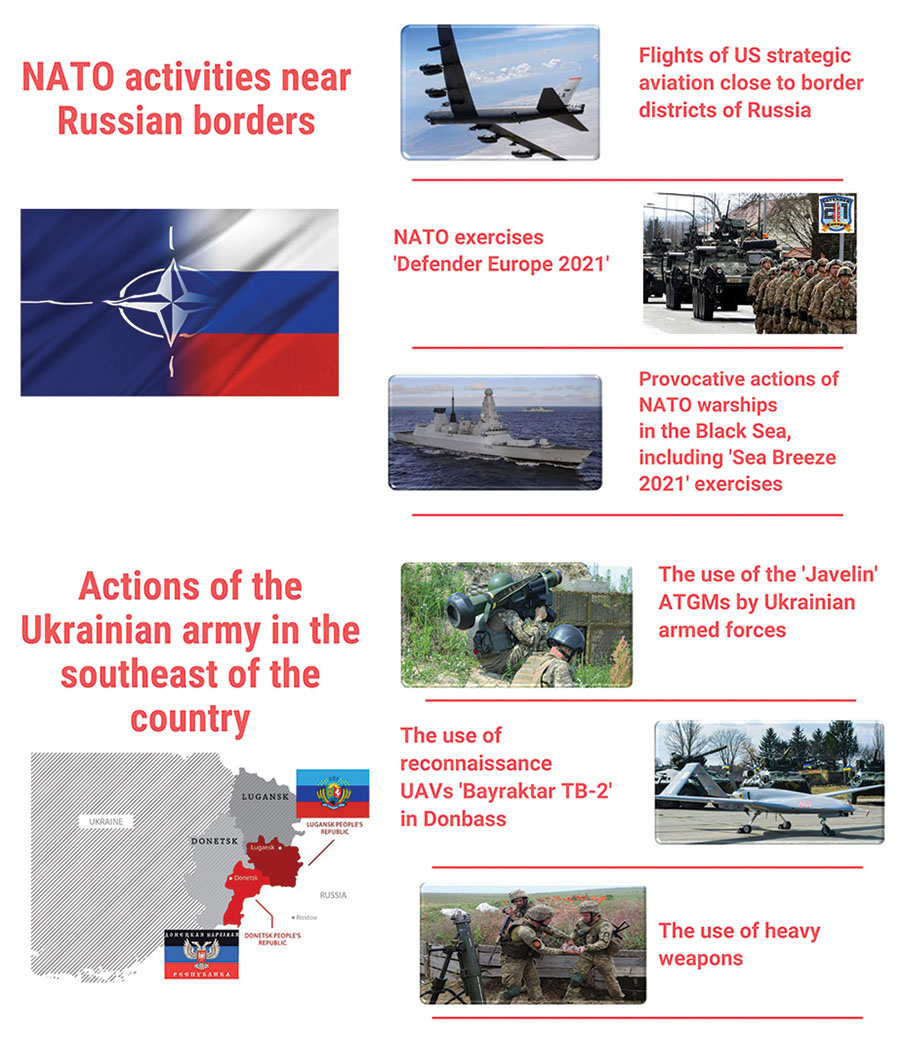 In this connection, as President Vladimir Putin stressed, we insist that serious long-term legal guarantees are provided, which would exclude NATO’s further advancement to the east and deployment of weapons on Russia’s western borders which are a threat to Russia. This must be done within a specific timeframe and on the basis of the principle of comprehensive and indivisible security.

To ensure the vital interests of European security, it is necessary to officially disavow the decision taken at the 2008 NATO summit in Bucharest about “Ukraine and Georgia becoming NATO members” as contrary to the commitment undertaken by all the OSCE participating States “not to strengthen their security at the expense of the security of other States.”

We insist on the adoption of a legally binding agreement regarding the US and other NATO member countries’ non-deployment of strike weapons systems which threaten the territory of the Russian Federation on the territories of adjacent countries, both members and non-members of NATO.

We also insist on receiving a concrete response from NATO to our previous proposals on decreasing tension in Europe, including the following points:

- withdrawal of regions for operative military exercises to an agreed distance from Russia-NATO contact line;

- coordination of the closest approach point of combat ships and aircraft to prevent dangerous military activities, primarily in the Baltic and Black Sea regions;

- renewal of regular dialogue between the defence ministries in the Russia-US and Russia-NATO formats.

We call on Washington to join Russia’s unilateral moratorium on the deployment of surface short- and intermediate-range missiles in Europe, to agree on and introduce measures for the verification of reciprocal obligations.

In particular, we will submit a comprehensive proposal on legal security guarantees as part of preparations for the next round of the Russia-US dialogue on strategic stability. We will advocate holding an in-depth discussion of the military aspects of ensuring security via defence ministries with the engagement of the foreign ministries of Russia and NATO countries.

We believe that the OSCE, which includes all countries of the Euro-Atlantic region, should not to stay on the sidelines of discussions on addressing the issues of Europe’s security.

We urge our partners to carefully examine Russia’s proposals and start serious talks on agreements that will provide a fair and sustainable balance of interests in our common space.

Democrats are off the rails on abortion

First Taiwan, then the U.S.?

Liberals finally learn the meaning of the word ‘woman’