The economic costs of riots and COVID-19 lockdowns - Washington Times

The economic costs of riots and COVID-19 lockdowns

Most of the onerous lockdown actions in Europe and the United States had little benefit, but cost jobs

The COVID-19 lockdowns and the riots will cause real incomes of most citizens in the United States and much of the world to be significantly lower than they would otherwise be, and personal misery to be higher.

At the beginning of COVID-19, little was known about the virus so political leaders could be forgiven for bad policy calls because they were receiving so much incorrect information from the medical “experts.” The evidence now appears to show that most of the more onerous lockdown actions in the United States and Europe had little beneficial effect but are unnecessarily destroying tens of millions of jobs and causing severe economic hardship. More on this below.

As of this writing, about 650,000 people worldwide have died from COVID-19. If the Chinese Communists had not covered up and deliberately spread the virus as they did, most of these deaths could have been avoided. If the Chinese had launched an unprovoked attack on the United States or Italy or other countries with conventional weapons, resulting in hundreds of thousands of deaths, the response would have been war.

Clearly, the Chinese Communists have much to account for, and the rest of the world should demand restitution before China is once again considered a “normal” country. The Chinese have forfeited their right to participate on a global level-playing field.

Political leaders, media figures and business executives in the U.S. and elsewhere are too timid or scared of the Chinese, or economically beholden to them, to do the right thing. The Chinese need to be called out and held to account. Those who decry long-dead advocates of slavery but are silent on the current actions of the world’s largest slave state –- communist China –- should be condemned for their hypocrisy.

The highest death rates per million are found in New Jersey, New York, Connecticut, the District of Columbia and Belgium. Places like Austria and West Virginia have death rates that are tiny fractions of the high death rate jurisdictions. The governors of New Jersey and New York required nursing homes to accept people already infected with the virus, leading to astronomical death rates in those facilities. Such actions were not only stupid but were criminally negligent.

Places like Sweden and South Dakota placed very few restrictions on their citizens and largely kept their economies open, thus minimizing the job loss and hardships. Yet, their death rates were no worse than many of the jurisdictions that imposed very economically destructive policies.  For instance, the death rate in Sweden is slightly lower than Maryland’s, and the death rate in South Dakota is much smaller than three-quarters of the U.S. states and a majority of large European countries.

The mainstream media have given much attention and criticism to the recent rise in COVID-19 cases in Florida and Texas (states with Republican governors) even though death rates in Florida and in Texas (the relevant statistic) are respectively one-sixth and one-tenth of those in New York and New Jersey (states with Democratic governors).

The median age of death of those who had COVID-19 is 78, and most of them had underlying health conditions, which had already shortened their remaining life spans. When young people die (and very few die from COVID-19), there is an economic cost to the country in terms of loss of expected output, which is not the case with the elderly. If every state and country had followed the Swedish and South Dakota models, and focused on protecting the elderly from infection rather than shutting down the economy, there likely would have been far fewer deaths, and little job and income loss. 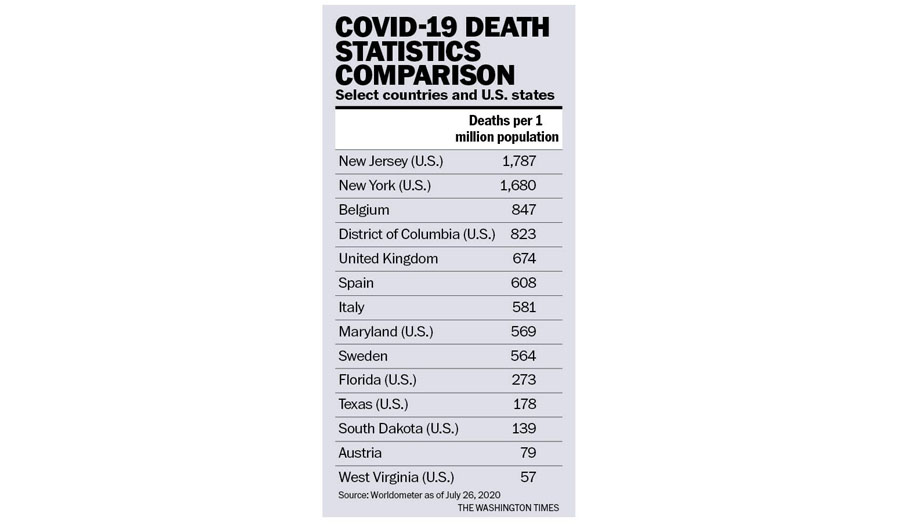 The riots in some major cities are also far costlier than generally recognized. It is not only the cost of replacing what has been destroyed, but the personal human and capital cost of all of those who have spent their lives to build businesses. Much of it will never be replaced, and all of the workers, customers and taxpayers will be poorer because of it. Many of the riots have been encouraged by irresponsible, politically-biased and pea-brained people in the media. Mayhem increases viewership, while law and order, where people are not getting hurt, is boring.

Some may say, “Well, much of the property is insured.” You can bet that every property insurance company is now recalculating their expected losses because they now realize in many places the political authorities are destroying the ability of police and fire personnel to protect property. This means that everyone’s rates will rise.

Is your mayor or governor going to pay your premium increase because they failed to do their job?

• Richard W. Rahn is chairman of the Institute for Global Economic Growth and Improbable Success Productions.

Why I will not accept Joe Biden as president

Democrats’ rule: Bow before them or burn

Armed insurrection: Congress votes to overturn the next election

Shutting down Parler won’t stop domestic terrorism. But it could make it worse

Who does Chuck Schumer mean by ‘we?’

Why fake news is here to stay

What America faces with Biden and his Congress

GINGRICH: Big Tech is a big fraud with its bogus censorship

How Democrats incite violence and insurrection by impeaching President Trump