General: 'Use drones to kill' the Taliban in Pakistan - Washington Times

General: 'Use drones to kill' the Taliban in Pakistan

A longtime adviser to U.S. commanders in Afghanistan says now is the time for President Obama to change strategy and target Taliban leaders ensconced in Pakistan, using drones and other tactics employed to kill al Qaeda operatives over the past 10 years.

“We kill them. We use drones to kill them, just like we did al Qaeda,” said retired Army Gen. Jack Keane, just back from a two-week tour of the battlefield and consultations with U.S. commanders. “The president has to change the policy and issue a ‘finding’ that this is a covert operation under the province of the Central Intelligence Agency.”

Gen. Keane pointed out one of the great ironies of the long war in Afghanistan: The main U.S. foe is the Taliban, but senior Taliban leaders have untouchable safe havens in Quetta and Peshawar.

Taliban leaders in Pakistan work out of command centers and conduct conferences, or shuras, with lower-level commanders on tactics for killing NATO troops and bringing down the elected government of Afghan President Hamid Karzai. 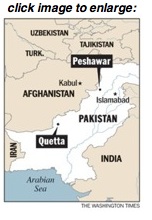 “A lot of these guys command from the rear, if you will, telling their guys by orders what to do and what not to do,” a U.S. briefer said to visiting officers last year.

Until now, the U.S. has not targeted senior Taliban leaders for fear of alienating Pakistan, whose intelligence service helped put the Taliban in power in Afghanistan in the 1990s. Pakistan will not target them because of tribal loyalties and fears that such action could destabilize the country via a militant uprising.

What Gen. Keane is recommending is a war campaign in which the intelligence community, principally the CIA and the National Security Agency, focus spies, communications intercepts and satellites on Taliban commanders inside Pakistan. Once a commander is located, a Predator drone would be sent to kill him with a Hellfire missile.

“If we don’t start targeting the Taliban leadership now … the risk is much too high in terms of our ability to sustain the successes that we’ve had. We cannot let that Afghan Taliban leadership that lives in Pakistan continue to preside over this war and recruit and provide resources,” Gen. Keane said.

“We’ve got to get involved in disrupting those functions. We have to target them like we have done al Qaeda. We would not have to conduct on-ground operations, but we have to change their behavior by targeting them.”

He added: “Once you turn all of our intel systems on a priority target, we start to get a considerable amount of information, and the people who run these operations know how best to deal with it.

“We’re talking about a persistent campaign that puts the Taliban leadership at risk, which would change their behavior, and as a result of this, they would no longer be able to control operations effectively in Afghanistan.

“For 10 years, we have been unwilling to do this because we have believed this would destabilize Pakistan. The result is, we are destabilizing Afghanistan, and that is really tragic.”

One of those who would be targeted presumably is a Taliban leader whom the U.S. once held at the military detention center at U.S. Naval Base Guantanamo Bay, Cuba. Qayyum Zakir returned to Afghanistan after his release in 2008 and eventually became the underboss for Taliban supreme leader Mullah Mohammed Omar.

Some Pakistani officials have pressed Washington to stop missile attacks in the tribal areas where al Qaeda and its allies are targeted. The Obama administration is engaged in behind-the-scenes peace talks to persuade the Taliban to join the Afghan government in Kabul.

As a good-faith gesture, it is discussing releasing Taliban leaders at Guantanamo into Afghan custody. Vice President Joseph R. Biden has declared: “Look, the Taliban per se is not our enemy. That’s critical.”

As for Taliban talks, Gen. Keane said killing the leaders would increase pressure on the Taliban to hold real discussions, not to manipulate the U.S.

“The Taliban has not, in my judgment, in any significant way changed their fundamental goal and objective, which is to take over Afghanistan and return to running that country,” he said. “It doesn’t mean that we shouldn’t have negotiation talks with them. I think we should. But we’ve got to be clear-eyed about it.”

Now is one of the war’s most pivotal times. U.S. troops are on a stepped-up schedule to end Taliban control in various villages and turn over security to the Afghan National Army. The bulk of American troops are scheduled to leave the country by the end of 2014.

Defense Secretary Leon E. Panetta last week squeezed the timeline by saying U.S. troops would shift to an advisory role in mid-2013 instead of fighting alongside the Afghan army as planned.

Gen. Keane has criticized that schedule as premature. He called it a “show stopper” if U.S. troops exit in 2014 but leave the Taliban leadership untouched in Pakistan.

A former Army vice chief, Gen. Keane is one of the nation’s most influential retired four-star generals. He worked in 2006 to persuade the George W. Bush administration to change strategy in Iraq and shift to a troop surge.

He has made four tours of Afghanistan since Mr. Obama ordered a surge of troops in 2009, bringing the American presence to more than 100,000 military personnel.

His latest trip was at the behest of U.S. Central Command. He told The Times that he first wanted to see whether 2011 gains made against the Taliban in its birthplace city of Kandahar and in Helmand province still stood.

“I went back in, and I wanted to verify the Taliban was not able during [the] 2011 fighting season, spring, summer and fall, to take back any of the territory we had taken from them or to regain any control or influence over the population,” he said. “The fact of the matter is there is not a single place where they have been able to do that.”

The other crucial region is the border area with Pakistan, east of Kabul. The U.S. shifted forces there last year to stop Taliban infiltration.

“The momentum has shifted to our favor,” Gen. Keane said, “much as it did in [the] south and southwest — in other words, Kandahar and Helmand province — as result of the surge forces. We are now able to generate the appropriate level of combat forces.”

Gen. Keane’s assessment contrasts with a NATO report, widely quoted in the British press, that says the Taliban is poised to retake Kabul.

Much press attention also has focused on a scathing insider’s article in the Armed Forces Journal, an independent publication. Army Lt. Col. Daniel L. Davis accuses senior commanders of lying to the American people about purported progress in Afghanistan.

“What I saw bore no resemblance to rosy official statements by U.S. military leaders about conditions on the ground,” wrote Col. Davis, who spent last year in-country as part of a rapid equipping force. “Instead, I witnessed the absence of success on virtually every level.”

He added: “How many more men must die in support of a mission that is not succeeding and behind an array of more than seven years of optimistic statements by U.S. senior leaders in Afghanistan? No one expects our leaders to always have a successful plan. But we do expect — and the men who do the living, fighting and dying deserve — to have our leaders tell us the truth about what’s going on.”

“He doesn’t know what he is talking about,” the general said. “It is absolute rubbish. I don’t know what his agenda is or where he’s coming from.

“We have some of the best guys we’ve ever had in our military running this thing. This is my fourth assessment. In February of last year, we had already changed the momentum in the south and southwest. I went back in July and looked at it again. We had some of the fiercest fighting we’ve ever been involved in. And I looked at it again now. We have consolidated those gains.”

Gen. Keane said the big worry among officers and civilian officials is Mr. Panetta’s accelerated pace for ending the fight for U.S. forces.

“We can’t pull our forces out and at the same time degrade the support for the Afghan National Security Forces,” he said. “If we do that, that would be a slipshod exercise. It would be detrimental.”

Democrats question election results: ‘We just trust the machines, and we shouldn’t’

The media remains addicted to Trump

One if by land, two if by sea: US Navy's Amphibious Ready Group

Can you name these 1950s songs from their lyrics?