The votes in Oregon’s primary are expected for release shortly. Polls closed at 11 p.m. EST. 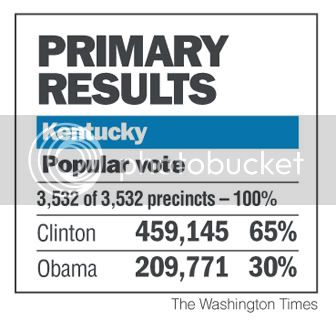 But Mr. Obama was set to declare he was closer than ever to the nomination, and was expected later Tuesday to claim he had reached a majority of pledged delegates to the party’s August nominating convention.

Mrs. Clinton, however, vowed anew never to give up until after the closely fought Democratic primary season ends on June 3.

“It’s not just Kentucky bluegrass that’s music to my ears. It’s the sound of your overwhelming vote of confidence even in the face of some pretty tough odds,” she told raucous supporters here.

“This is one of the closest races for a party’s nomination in recent history. We’re winning the popular vote and I’m more determined than ever to see that every vote is cast and every ballot is counted,” Mrs. Clinton said.

“I’m going to keep making our case until we have a nominee, whoever she may be,” Mrs. Clinton said with a wide smile at her victory party here.

But Mr. Obama was tipped to take the liberal western state of Oregon, where voting was ending at 11 p.m. and was due to hold his own rally in Iowa, the scene of his shock win in the first nominating contest in January.

The Iowa event was to remind Americans “that this was a very unlikely journey that we’ve taken,” Mr. Obama told MSNBC, while attacking Senator McCain for offering a “third term” for President George Bush.

But fearful of provoking the combative Mrs. Clinton, the Obama campaign denied it was adopting a triumphal tone about securing a majority of pledged delegates.

In a new sign of his growing political might, Obama’s campaign said the Illinois senator had raised $31 million in April.

Her effort has faced mounting debts however, and she has been forced to lend her campaign about $11 million of her personal fortune.

Clinton’s campaign chairman, Terry McAuliffe, said the Kentucky outcome was enough to give top party officials or superdelegates reason to doubt Obama’s capacity to win against Mr. McCain in November.

“Everybody keeps saying it’s over, but Hillary Clinton keeps winning in purple states,” he said, referring to swing states that are a mix of Republican red and Democratic blue.

According to the Web site RealClearPolitics.com, Mr. Obama had 1,610 pledged delegates heading into tonight’s primaries, just 17 short of a majority on the final stretch of the Democratic primary campaign.

With party elders known as “superdelegates” thrown in, the Web site said he had 1,915 delegates in total — so needed 111 more to reach the newly revised winning line of 2,026, counting a recently elected Democrat from Mississippi.

A total of 103 delegates was up for grabs in Oregon and Kentucky.

Mr. McAuliffe turned to no lesser an authority than Karl Rove, Bush’s long-time counselor and a hate figure for most Democrats, to burnish his arguments about electability.

An electoral map prepared by Mr. Rove’s consulting firm and leaked to the press showed Mrs. Clinton beating Mr. McCain easily in November. The race with Mr. Obama as the Democratic nominee was suggested to be much tighter.

But that contention, and Mrs. Clinton’s claim that she now leads in the popular vote including disputed primaries in Florida and Michigan, has not cut much ice with superdelegates as more party elders drift towards Mr. Obama.

Both Mr. Obama and Mrs. Clinton were heading to Florida tomorrow. The Sunshine State’s primary results, like Michigan’s, were voided by Democratic bosses over a scheduling row.

Heading to the final contests in Puerto Rico, Montana and South Dakota, Mrs. Clinton’s hopes hinge in large part on getting the Florida and Michigan delegates reinstated at a Democratic National Committee meeting on May 31.

Mayor Pete blasted for posing as a moderate: He’s ‘miles to the left’ of Obama

Michael Avenatti convicted on all counts in Nike extortion trial

Can you match the romantic movie quote with the film?

Can you guess the singers of these classic country music songs?